“Incel” is short for involuntarily celibate. It is a growing movement in the forgotten corners of the internet where opinions can fester and truly rot impressionable minds. Incels are someone who desires a sexual or romantic partner yet does not have the social graces to progress a relationship to that stage. Incels refer to this state-of-being as “inceldom.” The online subculture is primarily comprised of male heterosexuals using Reddit, as well as 4chan, VOAT, incel.me to commune their infectious philosophies of glorifying rape, racism and misogyny. A warped-mindset blaming successful or attractive women for not providing them with the companionship they feel they deserve. Some imagining the government should mandate one female for every male. As outlandish as it may seem, when the /r/incels subreddit was removed in 2017 the community had 40,000 members. That is only reddit, which still has forums today glorifying “aggrieved entitlement,” or men who feel they have been denied innately-deserved rights due to the rise of feminism. Unlike reddit (debatable) VOAT and 4chan have extremely lax regulations on content, allowing this movement to flourish unhindered. Their burgeoning group-think should not be ignored. At least 4 domestic terrorists have directly mentioned their involvement with inceldom in their manifestos/social media posts. As well as loose connections to the incel community being found in many other attacks. 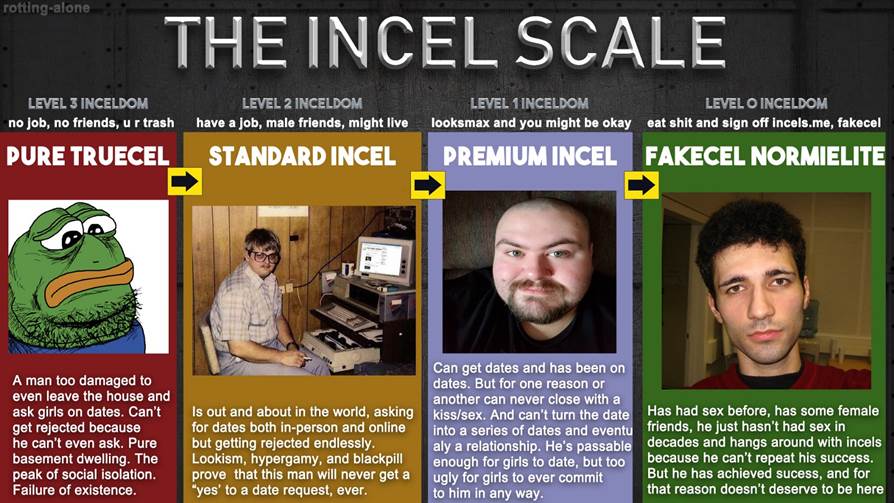 The history of incels is an innocent one. A website was created in 1993, by a Canadian college student, to discuss her ineptitudes at love in hopes of connecting with other lonely people. Anna’s Involuntary Celibacy Project, had a mailing list associated with the topic titled, “INVCEL.” This was then abbreviated further to “INCEL.” The original creator of the site gave it to a stranger while its innocence was still intact. Where it eventually went, was out of her control. The pervasiveness of this community is advertly deteriorating otherwise harmless sites. Incelsite, IncelSupport and love-shy.com were all inclusive in their inception focusing on remedying the incel mindset by focusing on the underlying issues. Without proper moderation these sites eventually deteriorated to violence adulation echo chambers. Love-shy.com was taken over by a user named “Rammspieler,” who took the site to new levels of extreme, quoted as saying:

“I did encourage Alexius to go buy a gun and kill his crush. Yes, in fact I do admire Cho, The Columbine Duo, George Sodini and any other individuals who have found the courage to do what they did and both deliver a warning to society and at the same time challenge our collective morality.”

This type of incitement is what moderators are diligently trying to wipe from their pages. For instance, IncelSupport upped their moderation using a prevention method that restricted users from engaging in “the seven deadly sins:” Apathy; excuses and justification; over-analysis; naivety; fear; rage; shame. Although their measures were proactive, it arguably had a negative effect. Pushing the blatantly misogynistic users to other sites, consolidating the worst of the worst mentalities of the “manosphere.” When considering the manosphere, incels lead the detritus with their tendency to openly discuss extreme violence. Other groups in the manosphere include: MGTOW (Men Going Their Own Way), who are bitter disillusioned men that have given up on romance with women; and TheRedPill, comprised of men who identify as misogynistic pick-up artists. MGTOW is self-explanatory, but TheRedPill needs to be explained.

TheRedPill name takes from the 2000 film the Matrix, where Neo needs to choose between a red and a blue pill. The blue pill would put his mind back into the simulation erasing any knowledge of the simulation itself, while the red pill would allow him to see the reality of things, witness the truth. TheRedPill believes that the blue pill is adhering to modern dating practices of respecting women as your equals, while the red pill provides an understanding that women have been brainwashed by feminist ideology, supposing women’s true want is to be dominated and kept in traditional gender roles. Traditional Meninists tend to subscribe to the TheRedPill and MGTOW for they are based in a position of power. While incels are derived from a place of shame and self-loathing. The incels believe they have taken the Black Pill. 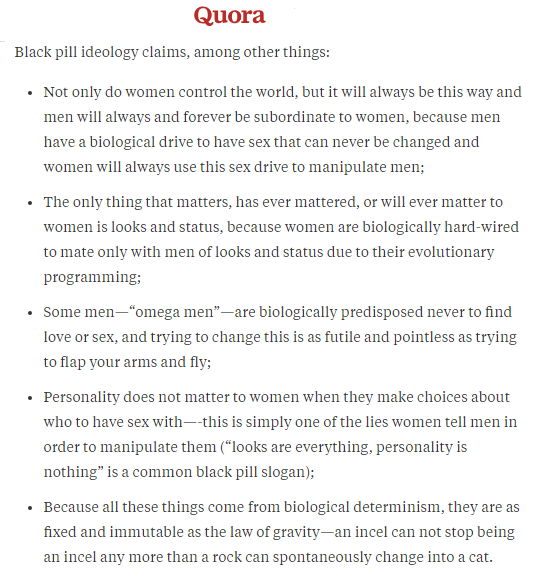 Black Pill incels have the most toxic and egregious view of women, referring to them as “femoids” to dehumanize them. If a woman is considered attractive, they refer to them as “Stacies.” On the opposite side, non-incel men are christened “normies,” while the most attractive non-incel men are simply “Chads.” Below is some of the artwork coming out of this subgenre of humans. 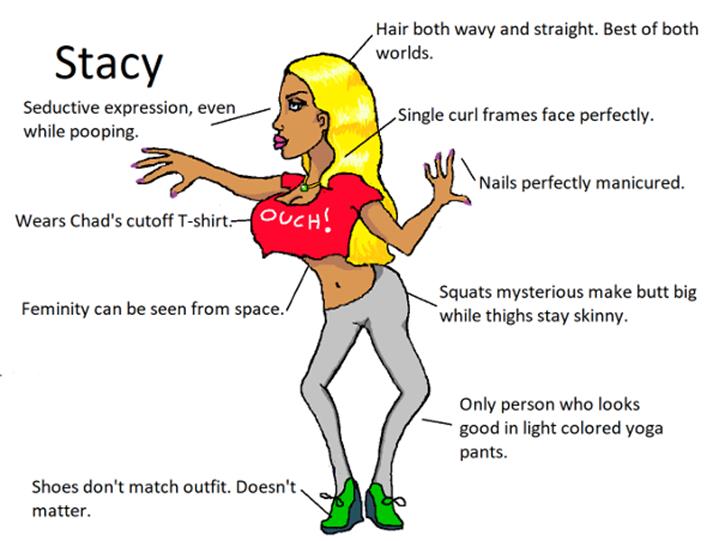 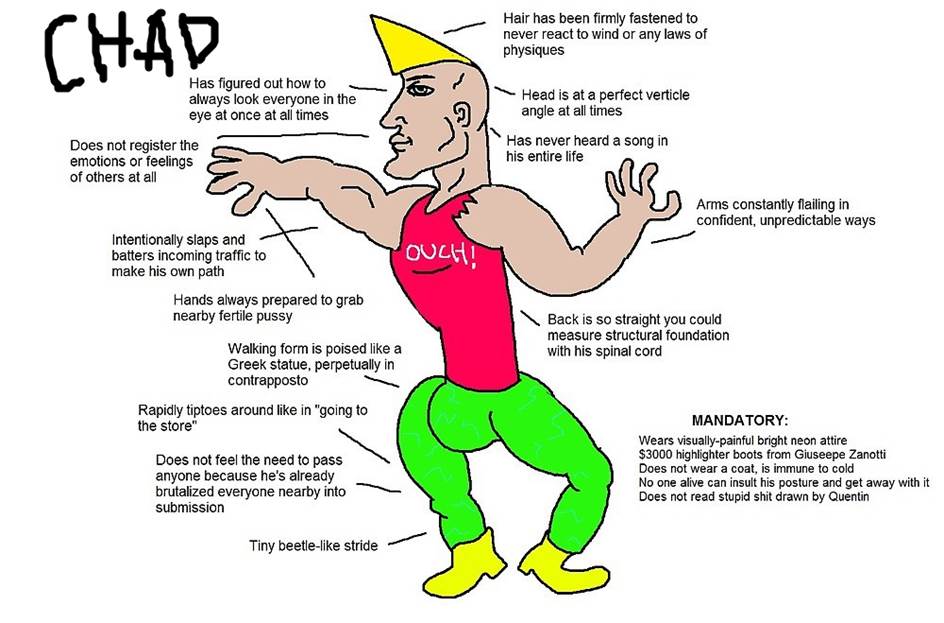 ****The above are real and they have grown in popularity to include countless iterations.

The humor and insanity of this group is palpable, but we as a society need to view these sub-sets in earnest when they begin to act on their rhetoric. There have already been 4 mass murders based on this mentality with more attacks tied to the ideology. The personality types that gravitate towards this outlook are usually the down-trodden, the left-behind, the bullied. The susceptibility of them to become radicalized by the most minimal of outside encouragement is extremely high. We need to be aware of their existence and understand why they think the way they do.