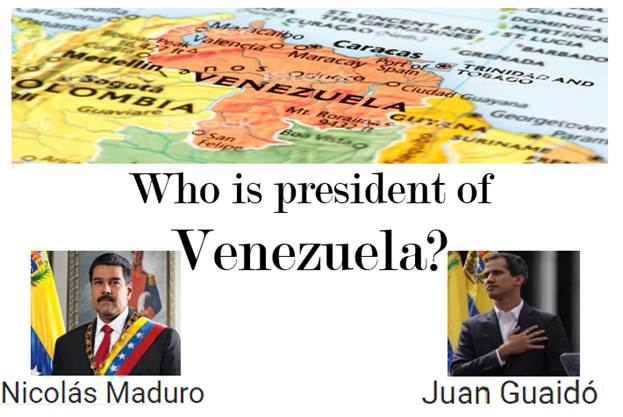 A brief run-down of what you may or may not know about the situation in Venezuela as of January 2019……..

January 23rd, Juan Guaido declared himself the “interim president” of Venezuela. Interim meaning temporary president until a legitimate election can be held. The proclamation was made amidst accusations that the previous election, held on May 20th, 2018, were illegitimate. Maduro won the election with 67.84%, the runner-up having 20.93%. A landslide to the misinformed, yet many factors must be considered. For quite some time now Venezuela has been under a dictatorship masquerading as democracy in action. The Maduro-approved supreme court, known as the Constituent National Assembly was formed in July 2017. Their assembly nullified the powers of the democratically-formed National Assembly. The National Assembly is comprised of voted in officials and is the only arm of the opposition party. Maduro effectively stripped them of any power, leaving himself unchecked, while creating his own congress that he could control. It was with this newly formed congress that Maduro held a sham election, for the most popular opposition candidates were purportedly jailed, exiled, or barred from running.

Henrique Capriles, 45, is a two-time presidential candidate known for representing the poor and disaffected-government supporters. In 2013 he narrowly lost to Maduro by 1.49%. Capriles was an extremely popular politician within the opposition. He was barred from holding any public office for 15 years by the national comptroller’s office, citing administration irregularities. This ban came after a week of several large opposition-led protests in the capital Caracas. Capriles was vocal in his support of these demonstrations.

Leopoldo Lopez, 46, is a proponent of hardline resistance to the government. He was jailed in 2014 for backing anti-Maduro protests. This resulted in a 15-year jail sentence on stimulating violence and terrorism charges. He has since been barred from politics over corruption allegations. Allegations presented by a prosecutor who has since fled abroad and spoken out that the Maduro administration had pressed him to use false evidence.

Antonio Ledezma, 62, was a lawyer and former mayor of Caracas. He recently fled house arrest by escaping by land over the Colombian border. He was removed as mayor of Caracas in 2015 detained on charges of plotting to oust Maduro. These charges were filed after he led anti-government protests in 2014.

Freddy Guevara, 31, congressional vice president and a leader of the Popular Will party. He is known for being a very visible leader of the 2017 political protests. In November of 2018 he relocated to the Chilean ambassador’s residence in Caracas amid fears he could be jailed.

This effectively suppressed the opposition party, which left limited viable options for the Venezuelan people at election time.

The Venezuelan people deserve a fair democratic election. Juan Guaido is an elected liberal representative speaker in Venezuela’s National Assembly. The assembly that was effectively sidelined by the Maduro-appointed, “Constituent National Assembly.” This illegitimate assembly is entirely staffed by Maduro loyalists. They called for and organized the 2018 presidential election. This was in direct violation of the constitution.  The constitution and Venezuelan law are supposed to guarantee freedom and fairness. Here is a list where those criteria were not met by the Maduro government:

These violations are what led to the National Assembly’s decision to declare the election unlawful, which means they do not recognize the results.  Michelle Bachelet, the U.N. human rights chief, noted that the 2018 process did not “in any way fulfill minimal conditions for free and credible elections.” Despite what Maduro claims, when his term ended on January 10th, 2019, there was no elected president to fill the presidency. Article 233 of the constitution regulates the presidential line of succession. If a situation like this were to occur. The president of the National Assembly would be the interim president until an election can be held. This is the process by which the country is supposed to handle illegitimate elections as is written in the Venezuelan constitution.

The international community has begun to weigh in on the issue. Below is a map depicting the supporters of Maduro (red) and Guaido (blue). The light blue depicts the fence sitting countries leaning Guaido. 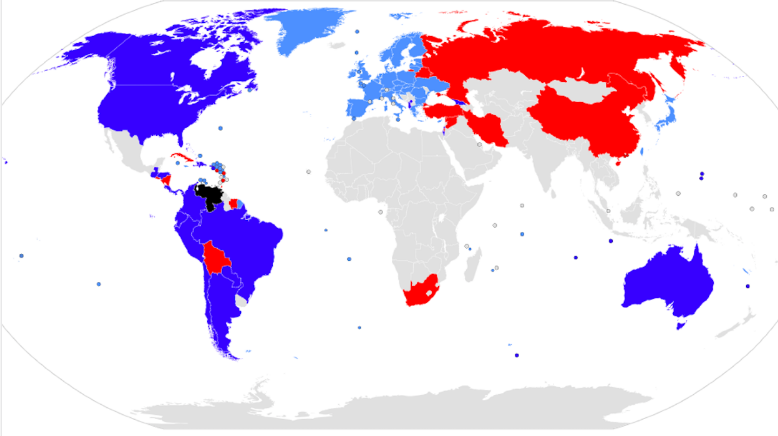 The leading authoritarian nations, including: Russia; China; Cuba; Turkey; Iran, are standing by Maduro. While Guaido is being herald as the democratic savior the country needs. (According to a UN report, about 90 percent of the population lives in poverty. The country's oil revenue is at its lowest in three decades.) The US declared their support for Juan Guaido, urging the entire international community to follow suit. Although, the motives behind the US support is suspect whenever large oil reserves are involved, they have chosen to support democracy in this situation. The conflicting support between Moscow and Washington has the potential to develop Venezuela into a proxy-warzone. We haven’t reached that point, yet signs are pointing that way.

On a humanitarian front over 5 million people have left the country, tantamount to the Syrian migration. Causing a refugee crisis that has international repercussions. Thousands of anti-Maduro protestors have been protesting in the streets almost daily. Below is a picture from April 19th in Caracas (Source: the Atlantic). 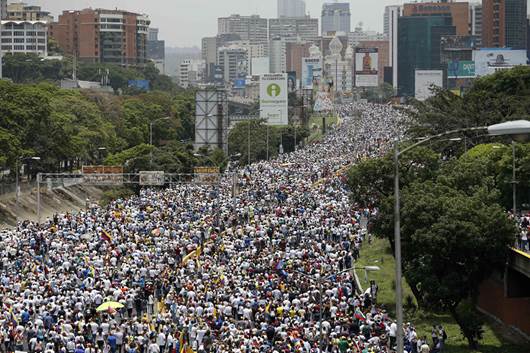 The international community supporting a fair re-election consists of the United States as well as: Argentina; Brazil; Colombia; Costa Rica; Ecuador; Germany; the socialist party that runs Albania; Canada; Australia; Paraguay; Peru; The government run by the socialist party of Spain and more. On an international level the lines have been drawn and the world is split. We all must consider the outcomes that a conflict of this magnitude may lead to. This boils down to a country that has been destroyed by rampant corruption and the people simply want their country back.